With More Apartment Fires in the Bay Area… 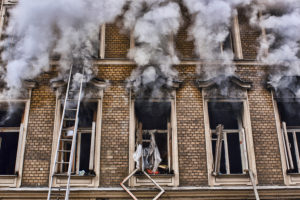 With more apartment fires in the Bay Area, I am re-running a blog I wrote on October, 17, 2016 called “Eviction by Fire.” Protecting your tenant’s rights is now more important than ever.

In early October, nine tenants were left homeless by another fire that damaged an apartment building in the Mission district.

There’s been a rash of them.  This 2-alarm fire took 66 firefighters about an hour and a half to put out. A SFGATE article noted that the fire “caused no injuries.”

I disagree. The nine people are homeless. Not only did they lose personal effects, but they have to find housing. In the San Francisco housing market with few affordable apartments, their search will likely be difficult.

So many fires in the Mission

One of my favorite websites, antievictionmapping.com, has an interactive map that shows the number of fires in the Mission district from 2005 through April, 2016. You can scroll around the map and see the number of units and the street address where each fire occurred. The sheer number of fires, depicted by the orange circles, is shocking.

Yes, the Mission district is full of older buildings. Much like other neighborhoods in San Francisco. But the Mission district is now a highly desirable area because of its close location to downtown. Talk to anyone with knowledge, and they will tell you about devastation these fires wreck on tenants, particularly low income ones.

But what about the law?

There’s a law for tenants that protects you if your home is destroyed by fire. If your apartment is under rent control, you have the right to return after the fire. A landlord must offer you back your home within 30 days after completing repairs.

While your building is being repaired, you do not have to pay rent on your fire-damaged home.  Once it is repaired, the landlord cannot increase the rent without the Rent Board’s approval.

If the landlord refuses to allow you back in your home after the repairs and instead rents it to someone else, then your landlord has wrongfully evicted you.

The law protecting tenants after a fire sounds good. But I am seeing more and more cases where the landlord is intentionally not making the repairs. The buildings remain damaged and unrepaired, even after the landlord has been reimbursed by his insurance company.

Some landlords have loss of rental income insurance, and therefore get income from the insurance company while the tenants are out of the building.  So the tenants can’t move back in and the landlords still get monthly rent money.

The City takes some action

About three months ago, the San Francisco Board of Supervisors approved new rules affecting residential tenants. Landlords must provide tenants with information on smoke alarm requirements, and post a Statement of Compliance regarding annual fire alarm testing.

For tenants whose buildings have burned

Keeping the landlord informed of where you move to is critical. I frequently tell tenants involved in a fire to be proactive by keeping in contact with your landlord by sending him a letter or an email with your current address, telephone number, and email address.

Having a landlord held accountable as to when the building will be repaired is critical. “I’ve seen a whole lot of people come in whose buildings have been burnt and they have a whole lot of questions and the reality is that we’ve never been able to answer them,” said Tommi Avicolla Mecca of the tenant rights group Housing Rights Committee said in a CBS SF Bay Area article. “This gives them the information that they need.”

No repairs after fire

If your building has already suffered from a fire, and your landlord is not repairing it, it’s possible he is trying to “wait it out” so that the old tenants become established in new places and will not want to move back to their old homes.

Is this against the law? It could be. The difficulty is proving it yourself. You should consult with an experienced tenant attorney who can help you assess your case.    I’ve had clients where the landlord received insurance money for burned building and then did not make repairs for about three years.  These “repairs” started after my clients filed a lawsuit.

Is the landlord negligent?

Another part of considering whether to pursue a lawsuit is to consider who caused the fire.  Were repairs to the building performed by licensed or unlicensed contractors? Was the work done in a timely manner, or was the building full of habitability defects?  Were there electrical hazards that the landlord had been cited for by the City and refused to fix?

If your apartment has been in a fire, you should proceed carefully to protect your tenant’s rights. You should consider calling a tenant attorney who has experience filing lawsuits on behalf of tenants.