The Case of the Unaware Landlord 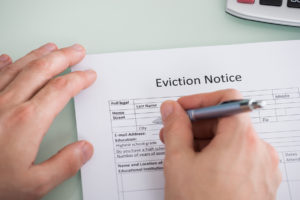 Details are important. They can make or break your case. That’s why, when you’re in a dispute with your landlord, it’s important to know the rules and regulations.

In Azar v. Rodriguez, the landlords did not know the details. Or if they did, they chose to ignore them. Luckily, the tenant attorney caught the discrepancy. It saved the tenants from being evicted for two years.

This case revolves around an eviction notice given to the tenants for an owner move-in. It’s about what was in the notice, and what was not.

The notice is important

The tenants received a Sixty-Day Notice to Terminate Tenancy for an Owner Move-In. The landlords gave the eviction notice to the tenants on April 13, 2015. (The opinion of the appellate court was filed on April 26, 2017, two years later. The legal process can take a long time.)

The tenants had lived in their home since 1991 and had signed a lease with Shukry Azar (just called Shukry in the case to avoid confusion) and Shibi and Naifeh (called Nancy in the case) Azar, who are Shukry’s parents.

The notice did not say Shibi and Nancy had a 100% interest in another unit at 715 Monterey, which had the address of 715A Monterey.

The tenants fight back

When the tenants did not vacate their home, the landlords filed an unlawful detainer lawsuit (an eviction) against them on November 2, 2015.

Three months later, the tenants filed a motion for a summary judgment. This motion basically is a request to the judge that the lawsuit be thrown out because there are no facts in dispute. In other words, the other party has no case.

In their motion for summary judgement, the tenants argued not all of the properties owned by the landlords had been listed on the notice, a requirement of the San Francisco Rent Ordinance. Specifically, the notice did not include the unit 715A Monterey, which was owned 100% by Shibi and Nancy. The landlords’ eviction notice did not comply with the requirements of the Rent Ordinance, and therefore the landlords’ notice was defective and the tenants could not be evicted.  The landlords, in other words, had no case.

Of course, the landlords opposed the motion for summary judgement.

They argued they were not required to list all the properties owned by all the landlords, but just the ones owned by the “moving-in landlord.” Therefore, since just Shukry was moving in, the notice need only list the properties he owned.

Shukry had no ownership of 715A Monterey, and therefore, they claimed, it did not have to be listed on the notice. Furthermore, 715A Monterey was already occupied and it was not available for Shukry to move in or offer to the tenants, as required by the Rent Ordinance.

Alternatively, the landlords argued the exclusion of 715A Monterey was an inadvertent omission.

The court granted the motion for summary judgment and ruled that the landlords could not evict the tenants.  Since the landlords had failed to include all properties owned by them as required by the Rent Ordinance, the court found the eviction notice “fatally defective.”

When the landlords appealed, they argued the lower court’s decision was in error. They reiterated the Rent Ordinance does not require the notice to list all the properties owned by all owners when only one landlord wishes to move into an occupied unit.

There were other issues on the case, but the court only addressed the motion for summary judgement.

What constitutes a landlord?

The next step the court took was to examine what constitutes a landlord. The Rent Ordinance is very specific on this issue as it relates to owner move-in notices. I won’t go into detail, but the court found that based on the Rent Ordinance, Shibi and Nancy were landlords. The notice should have listed all of the properties they owned. Therefore, the notice was defective.

That’s why having a good lawyer can help you with the issues of your case.