San Francisco Evictions by the Numbers 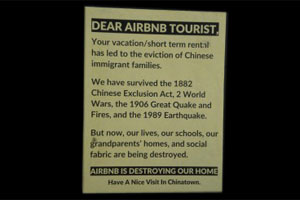 As most tenants know, it’s been a tough year to be a tenant in San Francisco. The news covering landlord/tenant evictions has been extensive. We have heard stories after stories in the media of tenants suffering hardship.

Now the annual statistics from the San Francisco Rent Board are out. The numbers support these hardship stories. The numbers show that it’s still bad.

First, though, I want to discuss Oakland’s attempt to grapple with the evictions. Oakland’s city leaders have gone a different direction than those in San Francisco.

Last week the Oakland City Council took the lead in grappling with the soaring number of evictions. A ban on evictions, called the Declaration of Housing State of Emergency and Moratorium, was proposed.

It didn’t pass, but the late-hour council meeting produced a lesser win for Oakland tenants: a 90-day moratorium on rent increases that exceed the CPI Rent Adjustment.

Oakland’s rents are the fourth highest in the nation, and yet 60% of Oakland residents are tenants. According to the Declaration of Housing proposal, the median two-bedroom apartment now offered for rent is $2,950 per month, an increase of 40% in the year between Summer of 2014 and Summer of 2015.

Not loved by landlords

Of course there were complaints from landlords. “Roofers, plumbers and electricians are not being told they can only increase their fees by (the consumer price index of) 1.7 percent,” noted one landlord as reported in SFGate. “The carpenter and the plumber are increasing their costs because the rent’s too high,” replied Peter Masiak from the Service Employees International Union.

Housing is a necessity, but carpentering and plumbing may not be. One tenant, according to SFGATE, stated that he’d had to choose between paying rent or the $200 he owed for child care. He chose rent. “My child may be kicked out today,” he said.

True for Oakland and San Francisco

In proposing the eviction moratorium, the City Council President wrote in the proposal that “(e)xisting Oakland tenants are unlikely to find new rental housing in Oakland if displaced. Based on the median annual income of households renting in Oakland, a one-bedroom would cost 74% of annual household income and 85% for a two-bedroom unit.

I suspect the same statistics are true in San Francisco as they are in Oakland.

The numbers come out

A few weeks ago the San Francisco Rent Board released their 12-month eviction report. The report does not following a usual calendar year. Instead, it extends from March 1st through February 29th.

There’s value in looking at the numbers

I like looking at the numbers because it helps me realize that the stories we see in the media and the stories I hear from my clients reflect what is happening across San Francisco.

The statistics for this year are skewed a bit. The landlord of one single project gave 1-day notices to all the tenants to perform asbestos abatement. I’ve adjusted the numbers not to include that complex.

Without that anomaly, there were 2, 134 reported evictions to the Rent Board. This is up .07% from 2,120 seen in the previous year. It might look like a slight increase, but according to SFist, the total number of evictions has gone up every year since 2010. That’s six years in a row.

Remember, these don’t represent ALL evictions, just those reported to the Rent Board.  There are many, many “evictions” where the landlord gives a bogus notice to his tenant and the tenant moves out.

Here’s San Francisco’s “for cause” evictions by the numbers, as an increase/decrease over the prior year:

The top five “for cause” eviction reasons show an increase of at least a 22% or more from the prior year. The top two categories, Capital Improvement and Habitual late payment, show a 43% increase. Ellis Act evictions increased 36%. Unapproved subtenant and owner/relative move-in were up 25% and 22%, respectively.

Otherwise, there’s little good news the eviction numbers. Unlike Oakland, San Francisco has struggled in the past two years to pass legislation that would protect tenant.

Are you being evicted? Unsure of what to do? You should consider taking to an experienced tenant attorney who knows the law.