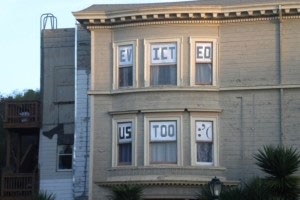 “All the renters I know are living in fear,” said Derrick Tynan-Connolly in the March 9th, 2016 New York Times.

He noted, “If your landlord dies, if your landlord sells the building, if you get evicted under the Ellis Act and you have to move, you’re gone. There’s no way you can afford to stay in San Francisco.”

The NYT’s article last week, called “Tensions on the Rise in Tech’s Capital City,” made the front page of the newspaper nationally. It stated what we in San Francisco already know: the City has changed.

And included in that change is a change in housing, and whether people can afford to live here.

In recent months, stock prices have declined. The money to fund tech startups has become limited. Even big tech companies are experiencing tightening with global completion. And while it’s a rare occurrence for local residents to cheer the downturn of local businesses, that’s what’s happening in San Francisco.

According to the NYT, a recent survey indicated that 39% of Bay Area adults thought things in California were going the wrong direction. This is up from 29% the year the prior year.

Part of the problem is the widening divide in income between tech workers and other people making an average salary.  Tech workers can afford to pay high rents. They can cover the median 1-bedroom rent of $3,500 per month, the highest in the nation.

And other workers? Redfin published a blog that stated the number of teachers who could afford to live in a house in San Francisco was…zero.

Helana Corda, a San Francisco teacher who works with six graders, was quoted in the NYT article saying, “I have a lot of friends who work in those (high tech) companies and they literally encourage me every week to quit my job and do what they’re doing. They think they’re trying to help, but I feel slightly offended.”

Will San Francisco teachers educate the children of tech workers, yet earn so low an income they’re unable to afford to live here?

One of the recent diatribes that has sparked controversy was the blog by start-up founder Justin Keller. In his open letter he wrote:

“I know people are frustrated about gentrification happening in the city, but the reality is, we live in a free market society. The wealthy working people have earned their right to live in the city. They went out, got an education, work hard, and earned it. I shouldn’t have to worry about being accosted. I shouldn’t have to see the pain, struggle, and despair of homeless people to and from my way to work every day. I want my parents when they come visit to have a great experience, and enjoy this special place.”

Helana Corda, the teacher, did go out and get an education. Undoubtedly she works hard. But no, as a teacher, she doesn’t “earn it.”

She is not working in the high tech industry which will help her afford high San Francisco rents.

In the NYT article, Craig Stoll, the co-owner of Pizzeria Delfina and other restaurants, noted that “A lot of our cooks don’t live in the city. They can’t afford it.” He should have also mentioned that the same is true for his servers and others who work at his restaurants.

San Francisco for everyone

Rent control has helped teachers and cooks to live in the City, but as Derrick Tynan-Connolly stated, so many people are living in fear.

One thing I love about San Francisco is its diversity. Nowhere else are people accepted and welcomed as in this City.

I don’t know the solution to this trend of higher rents forcing workers like teachers out of their homes. Apparently others don’t have a readily available answers either.

But what I do know is that I don’t want to lose the City’s spirit of embracing diversity. It’s too precious an asset. Once it’s gone, once we change our thinking, I doubt we’ll ever get it back.

How to fight the fear

Maybe the tech slowdown will be significant enough to take some pressure on the upward trend of rents, and maybe it won’t. These factors that are beyond your control as a tenant.

There are things you can do to protect yourself. Yes, they’re based on common sense. But as I’ve seen with my clients, a history of being organized and pro-active can have a great deal of impact on your legal case.

Here’s some of my suggestions:

Are you being evicted? Are you uncertain what to do? You should consider calling an experienced tenant attorney who can help you protect your tenant’s rights.