Is Your Neighborhood at Risk? 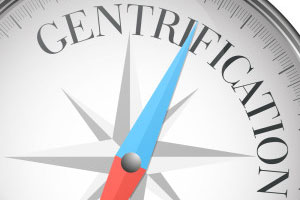 You’ve read about it in the news. Low income tenants being evicted in the Mission District and the Castro, making way for those with high incomes who can afford astronomical rents.

It could happen to you

Maybe you think that you won’t be evicted, since you don’t live in those neighborhoods. Are you sure? The researchers at the Urban Displacement Project at UC Berkeley say that the gentrification movement isn’t even half over.  Rising rents are going to force more low-income residents further and further into the outer suburbs.

The Urban Displacement Project is funded in part by the Metropolitan Transportation Commission. They were interested in finding out how building rail lines affected displacement of low-income units. Rail lines, even those in the planning stage, increase desirability and make housing prices increase.

Areas like East Palo Alto, Marin County, and San Francisco’s Chinatown have been stable. The lessons are that tenant protections like “just cause” evictions, rent control, and strong organization by communities affect rental rates.

The Urban Displacement Project’s map  shows your neighborhood’s stage of gentrification. Because the latest data is from 2013, the trend of short term rentals from companies like Airbnb might skew the results.

Being evicted, but you don’t think it’s fair? You should consider talking to an experienced tenant lawyer about the specifics of your case. Know your rights. Protect yourself.