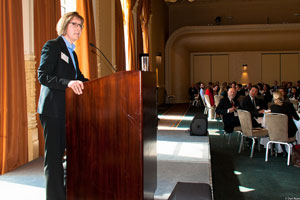 As an attorney who fights for tenants’ rights, I can demonstrate the way a landlord treats you is based in part by court opinions handed down over the years. (The other part, of course, is local and state laws, ordinances, and regulations.)

As a tenant attorney, I keep an eye on court opinions, specifically ones that will affect the direction of my current or future cases.

To prepare my speech for last Wednesday’s luncheon, I did a lot of research about the Chief Justice. The more I researched, the more I grew to respect and admire her not just as the Chief Justice, but as a person.

I am proud that Tani Cantil-Sakauye is the Chief Justice of my state. I’m glad to be a Californian.

If you’re a child and the hall was full, you can’t see over the big people seated in front of you.  Maybe there was a stage, but adult heads obscured the speaker. Whispers around you were distracting

It was a Veterans of Foreign Wars hall, maybe with a cracked linoleum floor and a few windows to let in the oppressive heat.

Undoubtedly Tani Cantil-Sakauye, then Tani Cantil, did not realize that this moment, this particular moment, would change her life and influence the lives of thousands of Californians.

Gloria Ochoa was speaking, a graduate of the U.C. Davis law school. Not that remarkable, until you think about it deeply. Ochoa is a Filipina woman. And she graduated from law school.

If Tani Cantil did not recognize this as an auspicious moment, her mother did.  Like all good mothers, she jabbed her daughter with an elbow and said, “You could do that too.”

It was the start of a long journey, of hard work and dedication. Undoubtedly there were many times of questioning, exhaustion, and disappointment.

But she did not give up. She persevered through hard times. She used the dream, the dream started by her mother, to propel her forward.

Now Tani Cantil-Sakauye stands as a leader, someone to emulate. She is many things: hardworking, successful, inspirational.

A special thanks to Dan Ryan, photographer, for use of the image.