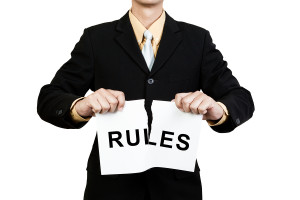 A new tool for evictions

New purchasers of buildings in San Francisco use House Rules as one of their tools for “gotcha” evictions, according to the SFChronicle. That’s when you are doing something that you’ve done for years, like renting to another tenant. Or storing your things on the back porch. Then a new landlord puts out some elaborate House Rules and you’ve violated them.

Gotcha. You’re then fighting an eviction.

One San Francisco landlord, who City Attorney Dennis Herrera calls a “ruthless predator,” has used House Rules to get tenants evicted. Her house rules, according to SFGATE, include such things as use of storage rooms, backyard access, parking rights, laundry, and storage of large items, such as bicycles. Tenants have been warned they violate the rules “at their peril.”

The City has a lawsuit against this landlord. Even if the City wins the lawsuit, other landlords will still use House Rules. The Apartment Owners Association of California website includes, among their forms, a generic House Rules form. At the bottom of the form it states in nice language: “Please follow the above rules and regulations to help keep common areas clean and to maintain a peaceful, safe and pleasant environment for yourself and your neighbors.”

Who wouldn’t want that?

The problem is when you take a closer look at the rules. They become areas of potential dispute. No. 3 states “Any resident who drinks excessively…will be subject to eviction.” What does that mean? If you have one too many glasses of wine because your friends were over, can you be evicted for violating the House Rules?

These examples are taken to the ridiculous. Or maybe not. The point is that House Rules can be  used to evict you. You don’t want to be arguing over some standard that the landlord might arbitrarily impose because he wants to rid the building of tenants paying below market rent, including you.

An addendum to your lease

Therefore, you should be very careful.

California state law allows a landlord to change the terms of a month-to-month lease. All he has to do is give 30-days’ notice. If you continue to stay in your home, then the new term becomes part of your lease.

If you live in San Francisco, a recent ruling of a case by the Court of Appeals in California is in your favor.

A loss of rights

In the case Foster v. Britton, Margaret Foster lived in the building for more than 40 years. In 2011, the building was purchased by John Britton, who served the tenants with new House Rules. These included that the tenants share the backyard equally, that they maintained their own garbage service, that they would keep all their property inside the unit out of view, and use a laundromat instead of sinks or tubs.

These House Rules were to take effect in 30 days from the tenants receiving them and that, like the state law, if the tenant continued to live in the unit, then they were accepted. However, if they are not accepted, the tenant could have given 30 days’ written notice to the landlord and moved out.

Foster argued that her long-term tenancy included garbage service, parking spaces, an assigned area in the back yard and use of her service porch for laundry and storage. Therefore, these new House Rules imposed by Britton cut into the rights that she had as a tenant. It also cut into her budget, as now she had to pay extra to cover her garbage service.

The San Francisco Rent Board has an ordnance known as Rule 6.15C, which basically states that a tenant cannot be evicted for violating something that was not in the tenant’s original rental agreement unless it is accepted by the tenant in writing. (Like most aspects of law, there are other contingencies which I won’t go into here.) The question before the Court of Appeals was whether or not the San Francisco Rent Board ordinance could triumph over the state law.

The Court ruled it did. It was a huge victory for San Francisco tenants.

Be smart with House Rules

My clients have received new House Rules from their landlords. There’s very little legal standing about changing your lease without you consenting to it.

However, I urge my clients to be proactive in making their objections known.

Here’s what I recommend. Document everything, including the date you received the notice. Then, well within 30 days of receiving these House Rules, write a letter saying that you object to them. Make sure it’s dated. Send by certified mail, which will show the date it was delivered. Keep a copy of your letter in your file at home.

Being proactive is part of protecting your tenant’s rights.

If you need help

Being evicted? Is your landlord using House Rules against you? You should consider calling an experienced tenant attorney who can advise you of your rights.