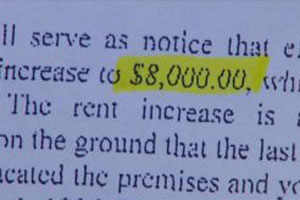 Neil Hutchinson is my client. His landlord increased his rent from $1,800 to $8,000 per month. That’s a rent increase of more than 400%. In all my years as an attorney fighting for tenants, I have never seen such a steep rent hike.

Neil lives in an apartment in North Beach, on the corner of Columbus and Scotland streets. His building is famous for being in Clint Eastwood’s 1988 movie “The Dead Pool.” When his landlord tried to raise his rent from $1,800 to $8,000 per month, his apartment became famous for another reason.

Neil is a video engineer. Like many people in San Francisco, he needs to live in the City to be close to his work. He does not own a car. “I don’t know where I’m going to go if I have to leave here,” Neil told local ABC News affiliate KGO-TV. “So, I honestly don’t know what I’m going to do. I’m struggling here.”

This past June, we went to the San Francisco Rent Board to appeal the landlord’s rent increase. The Rent Board judge will take about six weeks to decide Neil’s case, with the opinion due at the end of July. But the landlord slapped Neil with an eviction notice.

Neil tweeted his predicament, and the tweet got picked up by ABC News affiliate KGO-TV. Vic Lee, a brilliant reporter for the station, interviewed Neil. Vic wanted to see a copy of the rent increase letter to ensure that this was not some crazy hoax. I understand his skepticism. I gave him a copy of the letter.

Over the weekend, the story went viral. More and more people were shocked that anyone would receive such a rent increase.

Later on Monday, the CBS News affiliate KPIX-TV interviewed Neil and then came and interviewed me. They covered the story in San Francisco Man In Shock After Landlady Raises His Rent From $1,800 To $8,000

Both ABC and CBS tried to contact the landlord, whom did not return their phone calls. Then the people from HLN in Atlanta (which was formerly the Headline News) interviewed me from a studio in San Francisco. It was more formally done, with Neil and me sitting side by side. By this time, I think both Neil and I were getting used to being interviewed. That interview is here.

I knew that this was a national story when the New York Daily News called me and published San Francisco resident faces rent increase of more than $6K for apartment in building made famous by Clint Eastwood’s ‘The Dead Pool’.

Since that time, the story has spread around the world. It even got picked up by several Australian news sources.

Why was this story so catchy with the news organizations? For one, Neil is a nice guy who is trying to live his life in San Francisco by working hard in a good profession. Plus, some of the news sources, like those in Australia, ran the story to show that things aren’t so bad wherever they are.

But most importantly, this story is just plain shocking.

San Francisco is a tough place to find a home with reasonable rent that people can afford. That’s why I fight for tenants. You need someone on your side.

Thanks to ABC News affiliate KGO-TV for the image.