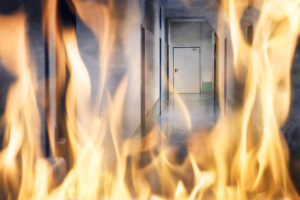 The City of San Francisco is aiming at a landlord who rented an illegal basement space to 20 tenants that the San Francisco Fire Department alleges had many fire code violations.

City Attorney Dennis Herrera stated on August 22 that the City filed a lawsuit against the landlord and others who rented the basement in an Outer Mission building known for the Clean Wash Center Laundromat located on 4680 Mission Street.

The last legal use of the basement was a subterranean garage, but since that time, it was constructed into a “rabbit’s warren of rooms,” according to a released statement, and included only two kitchens and three bathrooms for all tenants.

The entrance to the basement, which has an address of 5 Persia Street, is located near the back of the Clean Wash Center. This was the only entrance and exit the tenants had to their homes.

Calling it a “firetrap,” Herrera said in a statement that “these people were basically stuck in a dungeon. I don’t want to think about what would have happened if there had been a fire down there.”

Less than a month after the Oakland’s Ghost Ship fire, the San Francisco Fire Department was called to the building in a non-fire-related emergency call. Seeing the conditions of the basement, they notified the fire inspectors, and early in January the building was cited for numerous code violations. The San Francisco Department of Building Inspection also issued notices of violations.

After an administrative hearing in mid-February, the Fire Department ordered the building evacuated within 48 hours and relocation compensation of $4,262 per unit be paid to each tenant.

The door to the basement of the building on 5 Persia Street looks innocuous, and it’d be easy to walk pass it, not realizing 20 people live downstairs. The City alleged in their complaint City and County of San Francisco et al. v. Lexamark Building, LLC et al. that in January 2017, the basement tenants were all bilingual or monolingual Spanish speakers. They ranged in age from 12-year-old girl to a 72-year-old senior. One person was a cancer survivor, and one was receiving dialysis. One tenant had lived there at least 11 years.

The tenants had only oral rental agreements, according to the lawsuit, and paid the master tenant between $300 to $900 per month depending on the size of the room and the number of occupants. The master tenant collected the rent in cash and did not provide rental receipts.

Condition of the units

According to the lawsuit, the basement had concrete floor and perimeter walls, and wood-frame drywall sheathed partitions divided it into rooms. None of the rooms had running water, hot water, or heat. Tenants had to heat their water on hot plates.

When the Fire Department was inspecting the units in January, 2017, they found only one of the three bathrooms had a functioning shower. The complaint alleges no garbage service was provided to the basement tenants, and over the past the “apartments” had an infestation of vermin, including rats, mice, and cockroaches.

The master tenant, according to the complaint, terminated the electrical service in early February of this year, forcing the tenants to use a portable generator to light the windowless basement. During the day, the generator sat outside, visible to the street, but during the night the tenants brought it inside so it would not get stolen. By running it inside the building, they risked carbon monoxide poisoning.

In mid-February, the city building inspector found the portable generator so dangerous he ordered it to be turned off immediately and would not allow city employees to enter the basement while the generator was on.

The basement had no windows. In the event of a fire, the only exit for all 20 tenants was the one door out to the street.

Danger on the other floors

The City also alleged code violations existed not only in the basement but on the ground and second floor as well. They found improperly installed boilers on the ground floor space that were operating without the necessary permits.  According to the City, this posed a threat of explosion.

On the second floor, the space had been illegally converted to a church and had never underwent inspections to ensure it was safe for an assembly of people.

Calling the landlord a slumlord

Supervisor Ahsha Safai applauded the City’s move against the landlord. In a released statement, she called the landlord a “slumlord” and the City’s actions should be “a warning to all slum landlords and their enablers.”

The lawsuit is asking for a court order preventing the unoccupied areas of the building from being used until the code violations are resolved, restitution for the tenants, and civil penalties.  The landlord and master tenant are also being sued by the tenants in San Francisco Superior Court for damages.

The unanswered question is why did it take a tragedy like Oakland’s Ghost Ship fire to motivate the City to crack down on these types of landlords? Remember, one tenant at lived at 5 Persia Street for at least 11 years.

Are you a tenant? Do you have questions about your rental situation? You should consider talking to an experienced tenant attorney who can help you with your specific issues.