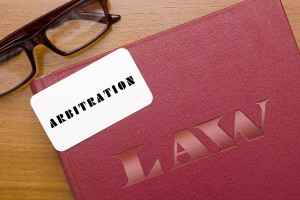 I’ve always been a strong advocate for tenant’s rights. Knowing what you’re getting before you move into your new home is one of the best ways to ensure that you are treated fairly if you have a dispute with your landlord.

Look before you leap

When you lease your apartment, you are signing a contract. You’re excited about moving into your new place, but like any major purchase, knowing WHAT you are signing when the lease agreement is in front of you will likely be important to you in months or years to come.

One section of your lease agreement might include signing an arbitration agreement. This is an important clause. It could have a significant impact for you as a tenant later. Generally, arbitration provisions do not work in your favor.

Arbitration is a way of resolving disputes. It’s a private, judicial decision by an independent third party. An arbitration hearing may involve one arbitrator or sometimes more, as long as it’s an odd number of people to avoid a tie decision. An arbitrator acts like a judge. The decision, unlike mediation, is just as final and binding as it is in a courtroom. An arbitrator can make decisions based on the law or based on her own personal feelings about your case.

A case that helps you

Jaramillo v. JH Real Estate Partners, Inc. (2003) is an important California case that helped protect your rights. The Jaramillos alleged that their rental unit was unsafe and unsanitary. The amount of moisture in the walls and ceilings created mold, fungus, and bacteria. Furthermore, Kim Jaramillo had slipped and fallen on a concrete ramp on the property and injured her knee. The injury was a result of the landlord not inspecting and repairing the ramp.

Hidden in their lease

The Jaramillos had signed an arbitration provision in their rental agreement. The clause stated that “any dispute between the parties relating to a claim for personal injury, directly or indirectly related to, or arising from, the condition of the leased premises…shall be resolved by arbitration conducted by the American Arbitration Association.” In the small print was a section that said the arbitration shall be conducted before three arbitrators and that the costs would be shared equally between by the landlord and tenant. The fees had to be paid before arbitration.

This clause sounds like it could have been fair to the Jaramillos, but it wasn’t. Their attorney argued that the clause was buried deep in the rental agreement. Their attorney noted that one arbitrator from the American Arbitrators Association could cost $2,000 to $3,000 per day, a cost prohibitively expensive for many tenants.  I myself have seen an arbitrator charge as high a $1,000 per hour. This sort of expense is what the Jaramillos would have had to pay to fight their housing violations.

A victory for the tenants

The Court of Appeal found that arbitration clause in this case was not enforceable. The Court noted that tenants generally have a weaker bargaining position than landlords. Because of their stronger position, landlords could exert pressure on tenants by making the a rental home dependent on the tenant wavering his rights.

The Court found that a residential tenant cannot waive in advance the right to a trial in any action that involves the tenant’s rights or obligations.  The Jaramillos could not decline the arbitration provision by initialing it in the lease. Therefore the  arbitration clause was unconscionable and invalid.

Does this throw out an arbitration provision in a lease? No. Tenants can sign away their right to a trial by signing a separate agreement. This is considered entirely independent of any lease agreement.

This separate agreement also could be defeated with the legal issue of unconscionability, but the issue becomes even more tricky.

Some leases now have a place for tenants to put their initials by the arbitration provision. Would the courts view this as a separate agreement? It has yet to be tested in California.

Complicating the situation even more

In the Jaramillo v. JH Real Estate Partners, Inc. case, the Court of Appeal was examining Civil Code section 1953. Another California law, Civil Code section 1942.1, seems to allow landlords to be able force tenants into binding arbitration when tenants sign the rental agreement. This law provides that landlords and tenants may agree in writing to arbitration when there are issues concerning habitability violations.

This is where it gets even trickier. The Court of Appeal in the Jaramillo v. JH Real Estate Partners, Inc. case did not come to any conclusion about this law.

Why you don’t want arbitration

Why is arbitration bad for you? As I discussed in my last blog, Your Right to a Jury Trial, you might want a jury to decide your case. A jury could be made up of tenants who have experience with difficult landlords. Arbitration does not give you that opportunity.

Arbitration can be very expensive. The costs of arbitration are frequently split between the landlord and the tenant. The landlord is usually in a better position to pay for the arbitrator’s time, to pay witnesses for their time, and to pay to research the case. This could make you more reluctant to start any action against the landlord because you can’t afford the cost.

The outcome of an arbitration hearing can be difficult to challenge. The arbitrator’s decision can only be challenged in court for extremely limited procedural reasons. So if you don’t like the decision, you are stuck.

Are you thinking of signing a lease with an arbitration agreement? You should consider talking to an experienced tenant attorney before you sign. Don’t sign away your right to a jury trial.