A Lesson about Rent Control from Santa Rosa 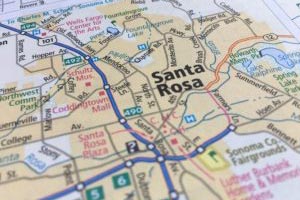 I heard a rumor two weeks ago that a number of 60-day notices to raise rents went out to Santa Rosa tenants even while the wildfires were still burning.

Santa Rosa has no rent control. Santa Rosa’s City Council had passed a rent and eviction control ordinance in August of 2016, but according to The San Francisco Chronicle, the California Apartment Association and its allies collected enough signatures to force the City Council to rescind the ordinance or send it to voters.   Residents voted against it in a special election held this past June.

Still can’t afford to live there

Santa Rosa, the fifth largest city in the Bay Area, is unique because its northern location has been less affected by high tech hiring, a force in increasing rents in other Bay Area communities.

Before the wildfires, Santa Rosa Councilwoman Julie Combs told The San Francisco Chronicle that with a “booming service industry, we have something like 12,500 back-of-house restaurant workers. Even though they are among the highest paid restaurant workers in the nation, they still aren’t making enough to afford median rents.”

The rent control measure, with some exceptions, would have capped increases to three percent a year.

Some restraint from price gouging

Some good news is Governor Brown’s Executive Order declaring a state of emergency in Napa and Sonoma counties on October 9th.   This kicks in California Penal Code 396, which prevents price gouging, defined as more than 10% increase over pre-disaster prices. The Code includes rental housing, which is defined as “rental housing with an initial lease term of no longer than one year.”

The prohibition on price gouging generally lasts just 30 days after the declaration of a state of emergency, but the Governor issued an executive order extending the prohibition until April 18, 2018.

The County could have helped

When the Sonoma County Board of Supervisors met on October 24th, they had a proposal for an ordinance which stated that, despite the declaration of the state of emergency:

County officials have been alerted to price gouging by persons offering housing for rent in Sonoma County. Price gouging includes not only unoccupied rental units, but also eviction of existing tenants of rental properties so landlords may take advantage of fire victims whose insurance companies will pay higher rental rates than previously charged for existing tenants.

In front of the Supervisors was a proposed ordinance would prohibit a landlord from renting any dwelling unit for more than the pre-disaster price. It was, in essence, a temporary moratorium on raising rents.

The ordinance would have also prohibited any person from evicting an existing tenant or terminating an existing rental agreement and then renting or leasing the same dwelling unit, for more than the pre-disaster price.

The Supervisors voted the proposal down. According to Santa Rosa’s The Press Democrat, District Attorney Jill Ravitch said that it would get in the way of her office prosecuting price gougers violating the state law.

Is it more important to go after the obvious price-gouging violators in to order to get convictions than help all renters in the county?

Even at the Board of Supervisors meeting, Ravitch stated the California Penal Code 396 applies to units that were advertised before the disaster at a particular rate. For those who haven’t advertised their units, Ravitch testified that “then 396 does not apply.”

At the meeting, Ravitch also stated that “there are a lot of people who see this as a great opportunity.”

I think she means landlords.

Looking at the cost

Limiting rent increases more the 10% increase might sound reasonable, but take a closer look at what it really means. According to Trulia, the median price of a rental this past August in Santa Rosa was $2,500 per month. (This likely includes houses.) A 10% increase of this–remember, Penal Code 396 says you can’t charge more than 10%–means that the renter could be paying $2,750/month, or an additional $3,000 per year.

How many renters could afford such an increase? Especially since it was the result of a disaster occurring in their community that made the demand for rental homes rise?

The Tubbs fire burned about 1,000 houses in the middle-class Coffey Park subdivision. Former homeowners are looking for rentals while they sort out their insurance issues. But even before the fire, there was already worries in Santa Rosa that the working class would be driven out of the city due the shortage of housing.

“Where are these people going to go?” said Sarah Karlinsky, a senior policy adviser at SPUR, a public policy think tank focused on urban planning in the Bay Area, speaking about the Santa Rosa housing shortage after the fire to The San Francisco Chronicle.  “Destruction of 5 percent of housing stock is substantial. They can’t just re-rent in the same place.”

Now the national news media has moved on to other stories. Yet still Santa Rosa tenants are struggling with affordable housing.

There’s no predicting the future. But now, after the agonizing wildfires, would more residents vote for rent control?