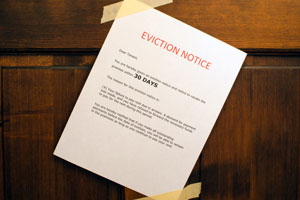 Here’s an important blog I wrote last year called “Don’t Be Fooled into an Eviction.”

Some landlords will try to get you to move without going through the expense and time to formally eviction you.

You get a letter from your landlord in the mail or find one stuck to your door. Feeling ill, you read that it’s a notice to terminate your tenancy. It looks official.

The letter my clients recently received from their landlord was just like that. It even said, “Landlord’s Notice to Terminate Tenancy,” in a very official-like manner at the top.  My clients thought it was good.

Take a step back

That’s exactly what your landlord wants you to do. Panic. And while you panic, you leave behind the cool thinking, the logical analysis, that you need in this type of situation.

It’s a trap. I routinely tell my clients not to fall into the landlord’s trap. Take a breath and step backwards.

Even though you get a “notice” from your landlord to move, it doesn’t mean you must move. In San Francisco, tenants under rent control can only be evicted for certain “just causes.” I wrote about “just cause evictions” for rent-controlled apartments in San Francisco in an earlier blog.

The first thing to do

Instead of panicking, the first thing to do is scrutinize the notice. Is it really a legal notice to terminate your tenancy? Does it meet all the requirements stated in the Landlord-Tenant law?

Chances are it may not. Frequently I find that landlords slap something together and hope that it scares the tenant into moving.

But it looks Official!

This specific notice included some legal-ese language in an attempt to bluff my clients into thinking that the landlord was playing by the rules. Phrases like “please be advised” and “hereby notified” and “shall be terminated” sounded official. But under closer inspection, those phrases couldn’t hide that the notice did not meet the requirements of a 60-day notice as stated in the Landlord-Tenant law.

It was a bluff.

I’ve also heard many times from my clients that their “helpful and friendly” landlord told them that they were having a family member move into their unit in a couple of months and they should prepare to move.

An eviction notice must be in writing. Legally, it cannot be delivered to you orally and constitute appropriate notice.  This is true even if you have an oral rental agreement.

Should you talk to your landlord about a bad notice?

As an attorney fighting for tenants, it’s not my job to educate landlords. As a tenant, it’s not your job either. Think about what could happen if you told the landlord about the elements (or lack of them) that failure to make his notice follow the law. Might you get served another corrected notice?

And then it’s too late

You have the best opportunity to fight your eviction case BEFORE you move. Occasionally I hear from someone who has already moved and wants to fight their eviction case. Unfortunately, at that point you have no recourse against your landlord in court.

A significant exception to fighting your eviction after you move out can occur if you are evicted, with proper notice, under an owner move-in. In this circumstance, the landlord evicts you because he or an approved relative is moving in your home. The law required that after an eviction, the owner or an approved relative occupy the unit for 36 months. If the building gets sold, the new owner must occupy the unit.

The owner move-in is a common way to evict a tenant in order to re-rent the unit at a higher amount. If this is the ulterior motive of the owner, few owners will live in the unit for the prescribed amount of time as required by the law.

Therefore, given all that you know, think about if it make sense that the owner or an approved relative really wants to move in. Sometimes it’s worthwhile to monitor where the landlord or the relative lives in the upcoming months and years.

What about the money?

If you move on the basis of a verbal notice or an eviction notice that does not follow the law, it’s very likely that the landlord is not going to offer you the relocation money that the law allows on an owner-move-in eviction. After all, if the landlord can bluff you into moving without legal notice, the landlord will likely assume that you do not know the law.

If you move on the basis of a non-legal eviction notice, it is very difficult, if not impossible, to go back and get the relocation money that was owed to you.

My clients’ “legal notice” ended with the words, “thank you.”   I say no thanks, not to this or any other “notice” that poses as a legal eviction notice. Landlords need to follow the law.

Not sure whether your eviction notice is legal? You should consider taking to an experienced tenant attorney who knows the law.